Navigation – Finding your way on a Self-Fly Safari®

Getting where you want to go is key to being a happy pilot and reliable navigation equipment is vital in your aircraft. Use your GPS.

A GPS is the standard tool for most pilots – South African and foreign – in southern Africa. Jeppesen’s “African International” database is the download needed for navigation. While it includes all major airfields, small bush lodge airstrips may not be shown. They are easily programmed into your own GPS. We’ll give you these coordinates for your destinations in your pre-departure briefings.

It’s a good idea to bring your own portable GPS with the Atlantic International database. You know how it works and what buttons to push. There is a learning curve for working any “black box” GPS you’re not familiar with. Bringing your own reduces your cockpit workload. Nonetheless, when you arrive in South Africa we’ll loan you one of our portable GPS's with your route pre-programmed. We use several older hand-held models including Garmin 295, 495 and an Aera 500. Some brokered planes have panel-mounted GPS’s such as a Garmin 430 or 530. There is good signal coverage throughout southern Africa. Turn it on, do what it says, and fly to your next stop.

Tablets: We supply pilots with Easy Cockpit® - an electronic VFR moving map program for southern Africa designed for Android and iPad tablets. It was developed by the same company that produces the Airfields Directory for Southern Africa the only such publication that exists.  Both are included in the Self-Fly 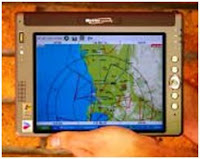 Safari® package. You can familiarize yourself with their materials on their web site: http://www.aviationdirect.co.za/index.php?page=easycockpit2.  Easy Cockpit® screen presentation is similar to ForeFlight but not identical and it works a little differently. ForeFlight is not suitable for our purposes as it doesn’t have a database for southern Africa. Bring your own tablet. It needs to have GPS capability.

While you’ll use a GPS, you’ll always want other options.

VOR’s exist and work at many major airfields in southern Africa. Within 50 - 70nm of aeronautical hubs in South Africa, Botswana, Zimbabwe and elsewhere, signal strength is good. However, VOR’s are often 100nm or more apart. You cannot fly seamlessly from one VOR to the next. All planes we use have two Navcoms, such as KX-125, KX-155, MX 300, or other.

There are also NDB’s (and local radio stations you can tune in). However, aeronautical NDB’s are being phased out and removed when they fail. Fewer and fewer aircraft have an Automatic Direction Finder (ADF) on board.

Charts: You’ll also have paper charts with you – required by the CAA – as a backup. South Africa prints VFR WAC charts (1:1,000,000) covering much of southern Africa. The geography is good but the government has not updated aeronautical data on most charts for decades.  VFR charts for Zimbabwe, Zambia and points north are long out of print. For these areas we supply Defense Mapping Agency ONC charts (also now out of print). The geography and terrain features are accurate but they are unreliable for current airspace.

Situational awareness: It’s always important to know where you are. It’s a good idea to refresh your basic pilotage skills. Over reliance on a GPS can lull you into ignoring your progress along a leg of your trip. GPS is reliable in Africa. But if the screen suddenly goes blank – a dead battery or inadvertently pushing the wrong button – you still need to get where you’re going.

Brushing up on map reading is also useful during your validation check flight. Your instructor may ask you to point out your current position on the aeronautical chart. Look out the window, notice a landmark, and point it out on the chart. He may simulate a problem ahead – say a thunderstorm – and ask you to divert to another airfield. In this scenario you need to know where you are more than where you were planning to go. Pilotage skills are useful.

Since my primary flight training I’ve drawn course lines on charts. I mark out 10nm segments and highlight visual reference points. Some pilots mark equal time
segments. I keep a finger on the chart and note the time we arrive at each check point. Used in conjunction with the GPS there is very little guess work. If my GPS dies I’ll still have a good idea where I am and what I need to do to get where I’m going.