What happens if an aircraft develops a mechanical problem along the way?

The plane you fly is Airworthy when you launch on your Self-Fly Safari. The fleet of available rental aircraft are older airframes – often 1970’s era C-182 P models. The planes fly regularly. They are well-maintained and all receive 50-hour, 100-hour, and annual inspections.  AD’s and SB’s are mandatory under South African CAA rules. The engines are all within TBO limits.In our 20 years staging Self-Fly Safaris we have never had a case where the client could not complete a trip due to mechanical or electrical issues with a plane.

However, glitches can occur – anywhere along the way. If a glitch occurs we jump in with a fix.  The cost of the fix is with the aircraft owner.  It’s important to remember that you are never alone. We can communicate with you wherever you are. If you need help we are there. That’s our job.

We deal with problems as they arise. What we do depends on many factors. What is the problem? Where did it occur? Are you able to fly to a field with an FBO?

During our “Route Briefing” we list the airfields along your route that have maintenance facilities.  If you have a problem and if you are able to fly, we’ll ask you to go the nearest one.  If you can’t, you should land at your destination lodge or the nearest suitable airfield. Once on the ground, call us. Give us as good a diagnosis as you can. What we do depends on the nature of the problem. Likely, we’ll have two or three days to effect a fix.


Once, early in our operation, a cylinder failed in a C-172. In that case we flew a replacement aircraft for the pilot to complete his safari. He missed one day of his scheduled itinerary.

These problems are rare.  Our point in highlighting them is to illustrate that they are manageable and that Hanks Aero Adventures actively deals with them.  We do our best to insure that a plane will fly the entire safari route and return to base without a mechanical issue.  It costs us money if a plane or a component fails. If a problem does arise we are there to deal with it with the least possible disruption to your safari.  It is a hallmark of our service and a matter of pride.
Posted by The Hanks Aero Team at 10:56 AM No comments:

Weather – what happens if weather interferes  with our safari?

Weather: Seasonal weather patterns in southern Africa are such that the region’s best flying weather – May through mid-October – coincides with the best game viewing. That’s when we operate, it’s winter in the southern hemisphere, and that’s when you should fly your Self-Fly Safari.

Daytime temperatures are pleasant (Low 60’s°F/16°C); there are no bugs, few clouds and, typically, VFR conditions. Nonetheless, weather can intervene.

“Season is what you expect,” the pilot said, “Weather is what you actually get!” By rule of the South African CAA, Self-Fly Safaris may only be flown during daylight hours in Visual conditions.  We watch the forecasts along your route.

If we see something likely to affect your itinerary we’ll let you know and offer guidance on how to deal with it. 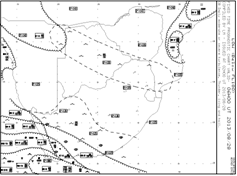 METARs and TAFs may be difficult to get at a lodge deep in the bush due to poor cellphone signal coverage. No formal PIREP system exists in southern Africa. Your first clue of the day’s weather at camp is to look to the sky when you wake up.  Chances are it’ll be clear, blue sky!

Beyond that …
1)    Hanks Aero can send you a TAF for the day’s flight on your cell phone or via satellite on your Delorme tracking device.
2)    Ask enroute ATC for weather at your destination.
3)    Speak to pilots aloft coming from the opposite direction.
4)    Get a forecast at major airports along your route.

In any case, if you can’t fly there are worse places to be stuck than at a private game lodge in southern Africa! If that happens we’ll be working at Base to make any needed adjustments to your itinerary – while you’re lounging comfortably at an amazing lodge.


Posted by The Hanks Aero Team at 9:30 AM No comments: