We encountered wind in Namibia during August. Local pilots confirm that the season – late winter with moderate temperatures – are prone to windy conditions. The same “August winds” are a factor in South Africa, too. They were not a constant factor during our 11-day flight around Namibia but the likelihood of encountering strong breezes has to be considered in this period. Good crosswind- landing techniques can be useful as most bush lodges have only one runway. 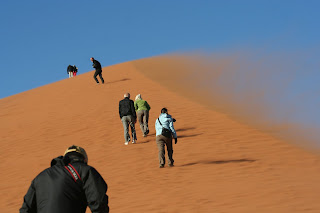 The wind made for slow ground speeds on some of our westerly and northerly legs but we made up the time on easterly and southerly legs. The C-182’s were able to make 100 – 110 knots ground speed going west and north but 130 – 150 knots returning to South Africa. Our progress in a C-172 dropped to 80 knots sometimes though we raced along at 130 going back. On long legs, Johannesburg to Upington (385nm), this meant spending a long time in a cramped cockpit.

Luderitz (FYLZ), right on the coast, is particularly vulnerable to wind. Its crossing runways (04-22 and 12-30) can be a great help when westerly’s are forceful. But make the time to tie down the airplane if you’re there overnight. The wind can also cause sand storms to reduce visibility to IMC conditions. The same applies to Swakopmund (FYSM). Its crossing runways (17-35 and 06-24) are really welcome in windy conditions. Both places have avgas and may be necessary refueling stops when flying through Namibia.

Where we really had to pay attention was at Eros (FYWE) – the general aviation field set at the southern end of the Namibian capital. Windhoek sits in a bowl of hills and wind from nearly any direction will cause turbulence of varying degrees. Runways are 1-19 and 09-27. ATC advised us of “winds 270° at 18, gusting to 30”. Runway 27 was perfect but we laid in a serious crab on base leg and used power on final.

Getting out of Eros was more of a challenge. Field elevation is about 5600’. A ridge to the south rises to 6500’ within less than five miles. The hills to the west climb more gently to 6,000’ within 10 nm. However, the westerly wind blowing over the hills creates burble and strong down drafts. The power difference between a C-172 and a C-182 is significant in these conditions. Take off was quick but rough air was a factor immediately after rotation and my groundspeed in the 172 was 43 knots. At about 500’ I turned out left. Our rate of climb showed, variously, 0 fpm, 100 fpm descent and 100 fpm climb. A mountain wave was holding us down. Not uncommon at Eros.  The terrain ahead already looked too close.  I told Tower we would “orbit” to the left to climb before leaving the area. After a 360° turn we had gained no altitude at all. I returned to a heading of 270° with the vertical speed indicator barely showing any upward progress. A wing would abruptly drop. The stall warning horn would sound momentarily. We were getting rocked around pretty good but were able to climb slowly.

The southern ridge still loomed ahead as we turned on course and the air was still very rough. I’d planned to level off at 7,500’ but told Windhoek Area Control that I wanted 8,000’ until I’d crossed the ridge. They allowed. Once beyond it the air smoothed and the rest of the flight was unremarkable.
On the ground at the Sossusvlei dunes, the wind provided a graphic illustration of how dunes are formed and shaped. Climbing “Dune 45” we braced ourselves against the wind. Sand blew from the ridge line like snow blowing off Everest. The blow often subsided in the evening when we could sit comfortably on the lodge verandah watching the sunset.
Posted by The Hanks Aero Team at 5:42 AM No comments: