Visits by foreign dignitaries are really demanding on any nation's resources and patience. Air Force 2 could have landed at Johannesburg’s O.R Tambo International airport (FAJS)or the South African military base at Waterkloof (FAWK), near Pretoria. But the route planners, whoever they are for the American Vice president, decided Biden would fly into to Lanseria. Lanseria management, which asserts the airfield is “secure”, got a taste of what US authorities regard as secure. Toes were stepped on.

In the weeks before Biden’s arrival at least three different US Air Force C-17’s flew in. Kulula.com’s green and white 737’s had been the biggest aircraft regularly seen on Lanseria's terminal apron. Now they were dwarfed by the gray Cargomasters. Tractors and other vehicles drove in and out of the plane’s belly unloading timber, generators, cargo and people. After one landing, the four-engine jet took off for a 54 mile flight to Pilanesburg (FAPN) – the airport for the Sun City resort with its gambling casino and entertainment complex. Vice President Biden was expected to attend the USA – England at soccer game and, presumably, the Cargomaster delivered logistic and support material for the Vice presidential visit at the stadium nearby at Rustenburg. It delivered its cargo and returned to Lanseria in a few hours. Two short hops for a monster four-engine jet aircraft.

When Biden himself arrived in country, Lanseria airspace was closed to all other traffic. Normally, closed airspace is reserved for heads-of-state only. Nonetheless, as a courtesy to the American’s, ATC closed Lanseria airspace for the arrival. Any other arriving aircraft were diverted or ordered to hold well away from the area. Lanseria's perimeter road was closed and patrolled specially for the arrival. The balcony at the airport’s restaurant, which overlooks the ramp and runway, was closed to diners. Uniformed and plain-clothes South African police and American Secret Service personnel occupied the balcony. The terminal lobby was crowded but many were wearing Lanseria ID badges and yellow reflective jackets. Others wore dark suits, dark glasses, with an earpiece snaking under their jackets – all the earmarks of Secret Service personnel. Embarking passengers were heavily outnumbered. Just as well, no other private or commercial planes were boarding or pushing back.

Looking west from the terminal to the Air traffic Control Tower, people stood on the Tower roof. This was a new twist. Tower personnel sometimes stand on the outside walkway when having a smoke break or taking a private phone call but not on the roof. Inside the tower were more of the dark-suited Secret Service personnel. That was a concession to the USA. The US insisted on snipers on top of the tower and marksmen were there. But they were South African special forces people, not Americans. That was a concession to the South Africans. Also present were a group of US Navy Seals in full combat regalia. ‘Trust but verify’ is the old Reagan phrase that comes to mind in this scene. Also in tower was an Austrian military guy. He was there on account of his prior experience policing the 2006 FIFA games in Germany. His job was to help distinguish the good guys from the bad if they threatened anything on and above the airfield. There were no incidents of any kind during Biden’s visit.

Lanseria’s regular security management, which took back seat when the Americans came in, had their noses bent out of shape. Conceding authority and having their own rules ignored is not their cup of tea. Later, they called the Americans “rude”. Really, it was just a US demonstration of how command & control is done -- a simple show of raw power.

Lanseria had come from a freewheeling airfield to one able to assure the US government and FIFA that security would be at the highest level. General aviation pilots should feel comfortable at lanseria.
Posted by The Hanks Aero Team at 3:58 AM 1 comment:

The Hong Kong crew gets going

It was a long rainy day from 5:30 when I got up and heard the drops on the thatch roof. The bridge was flooded. We pulled in to the airport at 7:15. The HK crew had just arrived and we had breakfast together. Their scheduled circuits (at 8AM as a check out for the 172) couldn’t be flown. The restaurant was crowded because all the Kalula flights were delayed. Service was lousy with the crowd but the waitresses and the kitchen were working hard. One B-737 did a missed approach trying to get in but came back around and made it in the second time. Conditions were a constant drizzle that sometimes turned into a hard rain. As the morning progressed conditions moved between VMC and IMC but always a mist and low scud moving over the field.

The plane the HK crew will take is out on an IMC flight (!?) and returned during an improvement in weather. It was not supposed to be and the FBO screwed up by letting it go. It delayed the checkout and cost the crew a chance to get out during one of the breaks. By the time they got the plane fueled and loaded the weather had closed in again. We got them permission to go out “special VFR” but they were last in line behind any and all IF traffic coming or going from Lanseria. The weather was good west of Jo’burg. They waited at the holding point more than a half hour and things finally went below minimums again.

They taxied over to the terminal and shut down and went back to the restaurant. We met them there and spent the next three hours waiting for a break. Wings Restaurant is a poor place to spend three hours. After one order everything else seems less appetizing.

Tower had graciously extended their flight plan for the rest of the say. At 3PM the crew set out to go. We went to the tower to watch and wait. They waited at the holding point and finally got off at 3:40PM. They got to Vryburg by 5:30. I called fuel at Vryburg and the guy was there. Chancy though, as it was Good Friday and a public holiday in South Africa.

Not only that, but the lodge wouldn't get off their chairs to pick up the crew once they got there. They finally gave me a number to call for a pickup (R50) to bring therm to the lodge. No report yet on what they found when they got there.
Posted by The Hanks Aero Team at 2:06 AM No comments:

We want to fly an autogiro through Africa

What a great expedition and adventure awaits you on your autogyro safari through Africa! I can't say I recommend it but whatever turns you on. Plan fully!

Christina and I flew a single-engine airplane (Helio Courier) from USA to Europe to South Africa about 14 years ago. Very little was written about trans-Africa flying. We spent a year preparing for the trip. We needed to determine where we needed visas, where we could find AVGAS, how it could be paid for (cards or cash), ports of entry and exit from various countries on the route, seasonal weather, flight clearances, inoculation requirements, and more.

We flew south through east Africa, not the west as you are planning. At the time Angola was in a civil war and a ”no go” zone. We circumvented Sudan as there was a civil war going ion there then, too.

2) Jeppesen, the provider for instrument plates and charts, is the most comprehensive source of information for nearly every aspect of flying anywhere in Africa. They have the entry requirements for every African country and the numbers to contact for clearances, flight plans, etc. Their information is expensive but indispensible – particularly if you’re doing it in an unusual aircraft (autogyro).

4) Charts: The best available charts for navigating anywhere in Africa are the ONC’s (Operational Navigational Charts 1:1,000,000) published by the US government NOAA and available from many map companies and pilot shops. http://www.maptown.com/worldaviation/af-1.html is one of them. Google “ONC charts” for a larger list. They are also probably available in Spain. These charts are useful for planning but they are big and would be a handful in the open cockpit of an autogiro. They show the best geography, but cannot be relied on for current airspace restrictions.

5) GPS: The Atlantic International database by Garmin is the best available that we know of for all of Africa. It matters less what GPS you use as long as you have the database. The most essential feature is its moving map with all current airspace. It does not include all small airfields. You’ll have to locate these through other means.

6) No amount of pre-planning is too much. Find out as much as you can about everything. Expect the unexpected. Be courteous to everyone you encounter. Look and act like a professional pilot.

7) Check our website(www.selfflysafari.com)for a selection of nice stops in Namibia.

Keep us posted and good luck!
Posted by The Hanks Aero Team at 1:26 PM No comments: 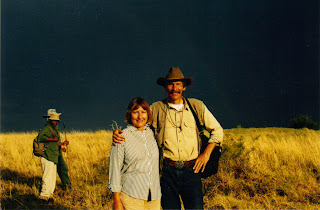 Christina and I first flew to Africa in 1996 in our Helio Courier. We flew from home in Warnerville, NY, trans-Atlantic, through Europe, and down the East African coast flying 140 hours over 5 ½ months before we rounded Cape Agulas, the southernmost point in Africa.

It was a great trip and gave our lives the new focus of promoting private flying in southern Africa. We set up an operation to give pilots an aircraft and route guidance to visit wild, remote parts of Africa while piloting a small aircraft. We’ve been doing that now for over a decade.

In many ways, flying in Africa is little different than any other part of the world. It’s air, airplanes and airstrips. ATC accents and phraseology can be different. Different weather patterns, joining and landing procedures – and the possibility of an elephant on the airstrip – are other factors pilots must consider. But if the basics are the same, the rewards – and sometimes the frustrations—of flying in Africa are unique.

Grass plains waving in the wind, breathtaking sunsets, driving among herds of elephant and buffalo, and listening to the roar of lions calling in the night, are just the headlines of endless adventure. The harmony of bush ecosystems contrasts with the shock and awe of the never-ending life and death struggle among the animals. Nothing is wasted. The elegance of luxury a bush lodge contrasts with the simple hut of an African village. But the warm reception and unwavering welcome and hospitality at both places is endearing to the soul.

All this, and more, awaits the visitor to Africa.
Posted by The Hanks Aero Team at 11:45 AM No comments: